Don’t Underestimate the Power of Protest

For centuries, we’ve taken to the streets when we’ve had grievances to share.

Within hours of the ground-shaking Supreme Court ruling that overturned Roe v. Wade and the legal right to an abortion, people across Wyoming started rallying and protesting, making their voices heard and channeling their anger into action.

That’s not surprising. For centuries, we’ve taken to the streets when we’ve had grievances to share.

From the Boston Tea Party in 1773 to the Stonewall Riots in 1969 to the Dakota Access Pipeline protests at Standing Rock in 2016, the right to join with fellow citizens in protest or peaceful assembly is a time-honored tradition and critical to a functioning democracy. 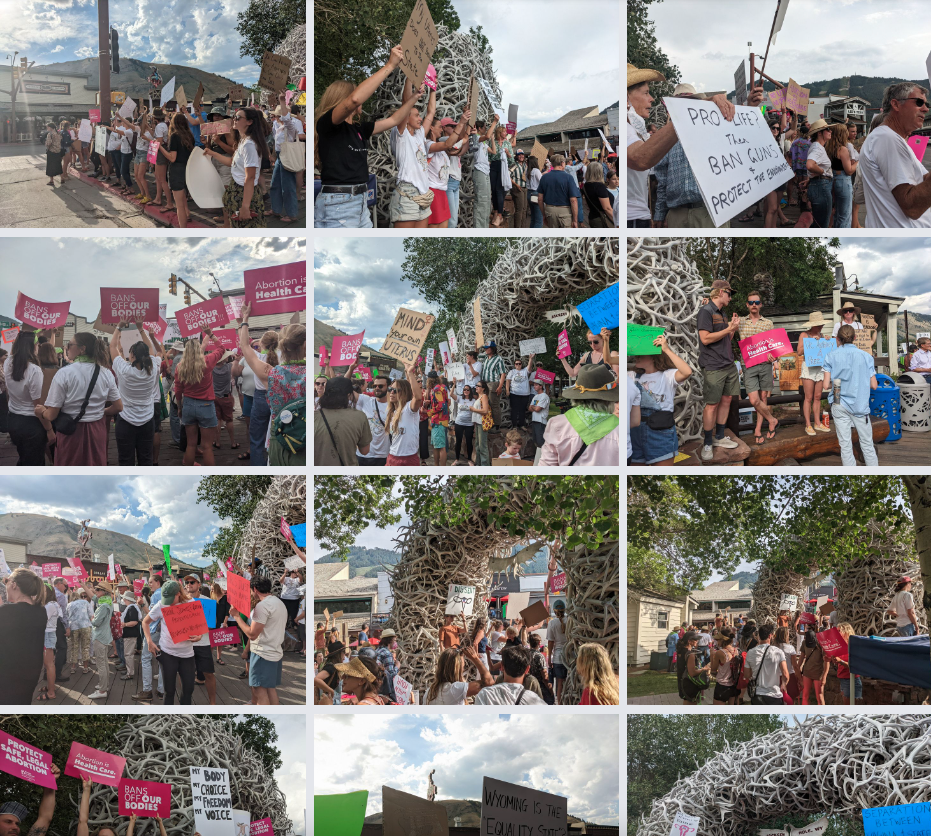 Some, however, have criticized these rallies and protests, wondering what, if anything, they actually accomplish. Everyone’s entitled to their opinion, of course. But those who question the effect of protests probably don’t want to see protestors’ views gain any traction anyway.

The power of protest cannot – and should not – be diminished.

Rallies and protests work because participants can demonstrate the importance of their beliefs to the society at large and let elected leaders and authorities know that their actions are opposed – particularly if their voices aren’t being heard through conventional means. A majority of Americans – 64 percent – say the decision to have an abortion, including the reasons and situations for having an abortion, should not be regulated by law, according to a 2022 PerryUndem survey. But our elected leaders in Wyoming don’t seem to be listening.

Rallies and protests are also a great way to get the conversation started about issues like abortion rights. For far too long, people haven’t talked about abortion. It was too impolite or too political. Too full of partisan talking points or too divisive. But if we want to change the political landscape around abortion in Wyoming, that’s got to change. And it starts with people rallying in the streets. You simply can’t ignore the opinion of hundreds of like-minded people – your friends and neighbors – who care enough about abortion rights to leave their homes on a hot summer night to march on the streets, can you?

And rallies and protests work because they are often the link between casual participation and lifelong activism. To be among a group of people demanding change is empowering and exhilarating. It’s the first step. Rallies and protests can sustain movements over the long-term as participants get to know each other during collective action. Today, someone protests the loss of abortion rights. Tomorrow, they’re organizing community meetings and voter registration drives or running for office.

On top of that, protests can – and do – spark real societal change. To that, there’s plenty of proof. In 2010, for instance, large Tea Party rallies led to more Republican votes. Eight years later, the March For Our Lives protests were successful in registering many young voters who were instrumental to Democratic victories in the 2018 midterms. And more recently, consider the Black Lives Matter demonstrations after the murder of George Floyd. Far from merely generating nightly media coverage, the protests resulted in some concrete changes in police practices in Minneapolis, including banning the controversial tactic of chokeholds. Thought more still needs to be done, similar actions have since taken place in other cities.

But change doesn’t happen quickly. The power of rallies and protests is in their long-term effects.

When it comes to the current fight around abortion rights, we know the path to taking back our rights is long. But the ACLU will be there every step of the way until we all have the power to make the best decisions for ourselves and our families. We won’t stop fighting until every person can get the care they need regardless of where they live without any obstacles, shame, stigma or harassment.

But we can’t do it without mobilizing supporters, focusing public attention, galvanizing popular opinion and building a movement. Now is our chance to escalate the energy of the moment and move from protest to power to policy change. That’s the true power of rallies and protests.

We Need the PUMP Act to Protect Nursing Workers Like Me

Police Are Using Newborn Genetic Screening to Search for Suspects,...

A Playlist for Protesting

Two Generations of Reproductive Rights Advocates on Life After Roe

Your Abortions. Your Voices. Your Stories. | American Civil...