The administration claimed significant progress in its report and presentation to the United Nations, but true progress has been sluggish. 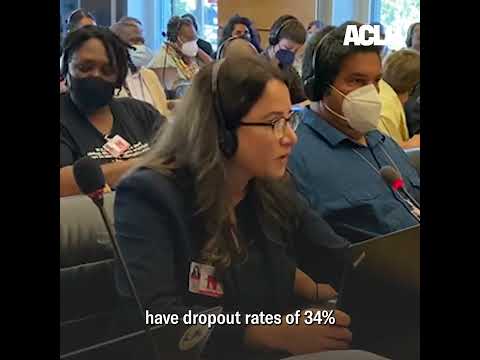 Every few years, the United Nations Committee on the Elimination of Racial Discrimination convenes to review the United States’ adherence to the similarly named racial justice treaty ratified by the U.S. in 1994.

Where the U.S. Stands on Racial Justice Today

When President Biden took office, he promised to reverse years of Trump-era disengagement on the international stage and center racial justice and equality at home and abroad. One of his first acts as president was to sign an executive order aimed at achieving racial equity in the U.S. In announcing the order, Biden called systemic racism “corrosive,” “destructive,” and “costly.”

We agree — but these remarks do not excuse the meager progress that the U.S. has made toward realizing the promise of the treaty: to eliminate all forms of racial discrimination.

The U.S. has intentionally exempted itself from human rights demands that it has pressed on other countries, while permitting structural racism and xenophobia to operate as pervasive, unbridled forces in American society.

In a joint submission ahead of the review, the ACLU and Human Rights Watch characterized U.S. progress toward compliance to the convention as “elusive — indeed, grossly inadequate” in various areas, including reparative justice, discrimination in the criminal legal system, use of force by law enforcement, discrimination in immigration enforcement, and racial discrimination in public services and social protection. Additionally, the report offers the Biden administration a roadmap to implementing measures to correct stark racial disparities without having to confront the U.S. Congress.

Posturing itself as a moral leader in defending human rights, the U.S. has intentionally exempted itself from human rights demands that it has pressed on other countries while permitting structural racism and xenophobia to operate as pervasive, unbridled forces in American society.

What We Told the Committee

U.S. civil society groups, including the ACLU, our state affiliates, and partners like Human Rights Watch and the Leadership Conference on Civil and Human Rights have been on the ground in Geneva to show the committee the substandard progress on human rights and racial justice, and what steps our government can take now to turn the tide.

Next Steps for the U.S.

After six hours of failing to provide adequate answers and leaving many questions unanswered to the frustration of the committee, it became abundantly clear that the U.S. has much more to do at the local, tribal, state, and federal levels to claim global leadership on racial justice.

President Biden can act today – by establishing a commission to explore the creation of a National Human Rights Institution and a federal body that can implement a national plan to fulfill international human rights obligations.

Echoing the demands of U.S. civil society, the committee also urged the Biden administration to issue an executive order to establish a federal commission to study reparations for slavery.

The U.S. delegation has 48 hours to submit additional information and responses to the committee, which will issue its final report and recommendations on August 30.

This process offers the Biden administration another opportunity to transcend the limits of the U.S. civil rights framework and dismantle structural racism in the U.S. through a robust, universal international human rights lens. It is also an opportunity to uplift the voices of directly impacted communities and address the way in which the legacies of the transatlantic slave trade and colonialism inform our contemporary world, a shortcoming of the U.S. identified by the committee.

The committee held the United States to account with its strong questioning. We urge our leaders to embrace the committee’s recommendations and comprehensively tackle systemic racism in the U.S.

President Biden can act today – including by establishing a federal commission to explore the creation of a National Human Rights Institution and the creation of a federal coordination body with a mandate to implement a national plan of action to fulfill international human rights obligations.

In her closing remarks, committee member Faith Pansy Tlakula quoted Nelson Mandela, “The very fact that racism degrades both the perpetrator and the victim commands that, if we are true to our commitment to protect human dignity, we fight on until victory is achieved. We should lay the scourge of racism to rest.”

It is time for the U.S. to reckon with its racist history.

At Liberty Podcast: It's Time to Tell Accurate Indigenous Stories

“Keep Our Families Together”: A Law That Protects Native Families...

At Liberty Podcast: Is SCOTUS Coming for Indigenous Children?

How to Start a Conversation About Voting Rights

This Month, We Honor Great Native American Leaders – Not That Other...