Exonerated and freed from death row in 2012, Damon’s life was cut short far too soon by COVID-19.

I first met Damon Thibodeaux early in 1998, on death row at Angola Prison in Louisiana.

I was his lawyer for the next 15 years, while he successfully fought for and won his exoneration and freedom in 2012. I was his friend until he died, on August 31, of COVID-19.

The Damon I met that day at Angola was beaten down and almost defeated by injustice and hardship. His childhood had been tough: He was raised by an impoverished single mother who loved him but could not protect him from abuse. At 21, he was arrested for a murder he did not commit. A year later he was convicted at a farce of a trial and sentenced to death. I’d come to ask him to let me represent him on appeal; he answered that he didn’t see the point. If he gave up his appeals, he reasoned, the hell of wrongful imprisonment and solitary confinement would be ended sooner, by his execution.

Death penalty lawyers call this “volunteering” for death. We try to offer hope in a dark place, without denying the reality of injustice and oppression. Damon agreed not to volunteer, and to let me be his lawyer. He had one memory of how I talked him into it, and I have another — but we laughed about it afterwards, more than once. He let me write a brief for him on appeal that was all about how false confessions happen, particularly when the police use the discredited “Reid technique” in interrogation, and then ignore the proof that the confession, like Damon’s, just doesn’t match reality.

We lost the appeal. And we lost most rounds of the post-conviction lawyering. Other lawyers did much of the heavy lifting at this point. The American Bar Association Death Penalty Representation Project found us a hero firm to join the fight, and that got us advocates who became some of Damon’s closest friends, Steve Kaplan and Pam Wandzel. They had the resources to get Jen Vitry, a private investigator and mitigation specialist, to investigate, and she became a part of his “family” too. When I went to work for the ACLU, Damon became a client of the Capital Punishment Project. When Barry Scheck of the Innocence Project came aboard, we believed we would win soon. It wasn’t soon enough, but in 2012, Damon was exonerated and released.

The thing I remember about Damon is how much he changed, and yet how he was always himself. The day we first met he was a slight 23 year old, eyes wary behind enormous glasses (the prison is obliged to correct your vision, not fit your face). He was so depressed I had to strain to hear him. During the years his legal team fought and lost round after round, he became stronger in body and more confident in who he was. The day he walked off death row and out into the sunshine, he was fit and healthy, and I clearly heard him say “See ya never” as he rode away from Angola.

After the press conferences and celebratory dinners, Damon and Steve drove him to his next home, Minneapolis. (They had to drive because Damon didn’t have any ID that would let him fly.) He got a small apartment and a part-time job in the mailroom at the law firm. He used to awaken most nights, heart pounding, and have to get up and open the door into the hall to reassure himself that he could leave whenever he wanted. (When I called that apartment “small,” he said, “You’ve been in the cells on the row.”)

The job wasn’t for him — “Too much time indoors,” he said, and I wondered if it might not be a little too much time around the law as well. But thanks to an Innocence Project donor, he found one that was: driving a truck. He became a long-distance big rig driver, and he loved it. He loved being outside, he loved seeing the country. When I got a campervan a few years ago, Damon gave me tips “from the pros” for my road trips, and called to check on me once I embarked, because that’s what a pal does. 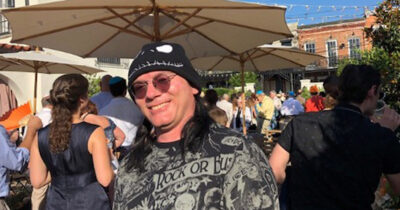 Damon kept changing, allowing himself to grow. When he first got out, he said he was distressed by crowds. But Jen asked him to go to a Pride march with her, and he went and had a blast. Years later we danced at her wedding, and grinned when her wife asked the crowd to raise a fist of solidarity for prisoners everywhere.

He told me early on that speaking in public was something he didn’t think he could do, but he became one of the best speakers for Witness to Innocence, an organization for and by death row exonerees. He gave many talks and interviews and appeared in several documentaries to get the word out about the cruelty of the death penalty, and the reality of solitary confinement and wrongful convictions.

Being one of Damon’s lawyers — and being his friend — was one of the greatest gifts of my life. He is the best example I can imagine of transformation in response to oppression and injustice. He never — really, never — again let himself be overcome by bitterness or despair. He had a full, beautiful life, and he said he had no time to spare for resentment or anger. Damon got vaccinated against COVID-19, but too late. He fell ill before his immune system, shredded by 16 years of traumatic and wrongful imprisonment on death row, could rebound. He hesitated because he didn’t trust the government. He had more reason than most.

Once his brother thanked me for helping Damon when we first met, when Damon was so low. I told him the truth — I had very little to do with it. Damon found his own strength. I never saw a more remarkable inner journey, and I have seen many an incarcerated person grow spiritually and mentally, despite the horrors this country routinely inflicts on them. But there was no one like Damon Thibodeaux. May he rest in power.

Documents Reveal Confusion and Lack of Training in Texas Execution

One Year Later: How the Biden Administration is Doing on Civil...

The Final Religious Request of a Man on Death Row is in the Supreme...

How to be a year-round advocate

Dollars and Common Sense: Repealing the Death Penalty Will Help...

Wyomingites to Rally Digitally in Support of Death Penalty Repeal

Download your posters for our Digital Rally in Support of Repealing...