Congress has a real opportunity to deliver a pathway to citizenship for millions of immigrants.

For the first time in a decade, Congress has a real opportunity to deliver a pathway to citizenship for millions of immigrants. For too long, immigrants who’ve called America home for most of their lives have still been forced to live in fear of deportation and the possibility they could be torn apart from their families and communities.

Congress proposed legislative solutions this year among growing momentum and pressure from constituents.

We recently joined Human Rights Watch and more than 50 other civil rights and human rights organizations to call on the White House and Congressional leadership to find an alternate route to deliver on the long-held promise to enact a path to citizenship and lasting protections for undocumented immigrants. Congress must do its job and get the job done this year. If Congress fails, millions of people will be denied the chance to live free from the threat of deportation, again.

We talked with directly-impacted people about the urgency of this moment.

Paola Garcia came to the United States from León, Guanajuato, Mexico when she was 2-years-old with both of her parents. Ever since then, they’ve been involved in an ongoing struggle to become citizens. Paola’s dad endured a fight for his own citizenship that lasted more than a decade and went all the way to the West Virginia Supreme Court. He eventually won his legal battle, but by that time, Paola had aged out of being given priority status to become a citizen. She is currently protected from deportation by the DACA program, which continues to undergo legal challenge and was never intended as a permanent solution.

“The Biden administration said they would do their best to make some type of immigration reform in the first 100 days,” Paola said. “Those 100 days are up and I’m still waiting unfortunately. The only thing that could grant me access as a legal citizen here would be if there was some type of legislation.”

Paola is urging Congress to pass a pathway to citizenship so she can continue being an advocate in her community without fear of deportation.

“If I could say something to Congress, I would ask them ‘What inspired you from the very beginning to become a representative for people?’ When you think about that answer, most of the reasons they would give are the same reasons that immigrants come to West Virginia, the same reasons that immigrants come to the United States. We want to contribute. We make America richer – not just financially – culturally, physically, mentally, spiritually, all of that. We need all of that, especially right now. America is in a big world of hurt. We need people to take up responsibility. We need people to become community leaders. The majority of us just want to better ourselves, the country, and our communities just like anyone who is in Congress.”

Irma Flores came to the United States 20 years ago following an earthquake in El Salvador.

“I made the decision to come to this country to try to find better opportunities and better education for my son and my daughter,” Irma said.

Irma was granted Temporary Protected Status. She had trouble navigating the school system for her young kids and decided to start educating other immigrant families to help them navigate the schools too.

“My commitment with the immigrant community has been supporting them, bringing services, and letting them know we have rights because that is something we didn’t know when we came to this country,” Irma said.

Irma now has five grandchildren and is fighting for a pathway to citizenship because it will provide stability for her family and allow them to travel to see family members in El Salvador. Her family was hit by tragedy when her father died last year.

“I didn’t have the opportunity to go and say goodbye to him because we can’t. I don’t want that to happen if something happens to my mom. A path to citizenship will help people like us, human beings who have family in other countries and we are not able to visit. We need to have that connection to see our families. I have seen a lot of families in the same situation,” Irma said.

Irma is urging Congress to act upon its promises and deliver for families like hers.

“After the many promises they have given to us, it’s just time,” Irma said.

Omar Salinas-Chacón came to the United States after his family became targets of gang violence back home in El Salvador. Omar is a DACA recipient and says the instability of the temporary program impacts every aspect of his life.

“I have to renew my DACA every year and a half and that’s really as far as I can plan out my life. I would like for that to change,” Omar said.

Omar is active in his community as the Kentucky State Manager of the Save the Children Action Network and a board member for the ACLU of Kentucky. He is asking Congress to pass a pathway to citizenship and to consider the desperation so many immigrant families face.

“I want Congress to think: What would it take for them to pack up their entire family and go to a country where they don’t even know the language? Imagine how desperate you are to do that? We don’t choose to leave our homes. All I’m asking is that I become part of this home I’ve called home for over 20 years now,” Omar said. 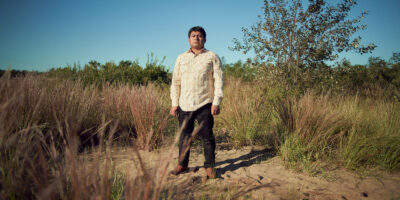 Jesús Benavides has lived in the United States for 17 years. He works construction and is involved with his community through La Colmena, a group that organizes immigrant workers in Staten Island.

“In Mexico, the jobs do not pay people enough. I came here to have better opportunities and to help my parents,” Jesús said.

Jesús suffered the loss of his father last year and said the grief has been even more challenging because he is far away from his family.

Jesús is asking Congress to pass a pathway to citizenship for immigrant workers like him.

“They need to work to pass a pathway to citizenship for the millions of immigrants who are here because we’ve been working really hard during the pandemic. We are essential workers who helped New York and the entire country and kept the economy moving forward,” Jesús said.