Since attending the institute, I've put my passions into practice in my community, but I'm just getting started. There are hundreds of stories just like mine.

I stumbled upon the ACLU’s National Advocacy Institute by total coincidence. A friend mentioned that she attended the institute in a previous year, and I happened to see a post about it on my Instagram feed. I took a chance and decided to apply, but never thought I would get in, let alone that it would spark in me a passion for organizing and advocating for my community in Austin, Texas. But now, two years after I attended the institute, I can see just how important this program is to building the next generation of civil rights leaders, advocates, and organizers.

The ACLU was still very new to me when I applied to the institute. I knew the organization fought for civil rights and liberties, but it wasn’t until I attended the program that I realized just how broad the ACLU’s mandate is. Now, I know the ACLU is one of the most progressive organizations in the U.S. The ACLU is committed to training young people to be disciplined and pragmatic, to stand up when something isn’t right, and to commit to giving back and making a difference, no matter where we are.

After I was accepted into the institute, I started setting goals for myself to build my understanding of social justice and my skills in organizing, and learn to be a better advocate for my community. During the week-long program, I did all of these things and so much more: I learned about the intersectional nature of race and power, how our institutions have been structured to oppress some groups while entrenching the power and influence of others, and why we must work urgently to dismantle these systems if we ever want to achieve racial equity and justice in this country.

When I arrived, I was nervous and a little overwhelmed. Knowing I wasn’t alone in the struggle to build a more equitable and just world is something I will always remember. Seeing dozens of protests, demonstrations, and rallies is just a typical week in Washington, but it was all new to me. These people took to the streets to demand change and refused to be silent, even in the face of intense opposition.

That week, I had the opportunity to meet students and speakers from all over the country with a range of perspectives, identities, and passions. It was a humbling experience meeting so many dedicated and involved people who were willing to travel across the country and sometimes thousands of miles across the ocean to learn about how to be a better activist and the power of young people getting involved in the political process. I went to a high school with many exceptionally intelligent and well-rounded students who were recruited because of their academic achievements, but I still never felt more intellectually stimulated as I did when I was in D.C. 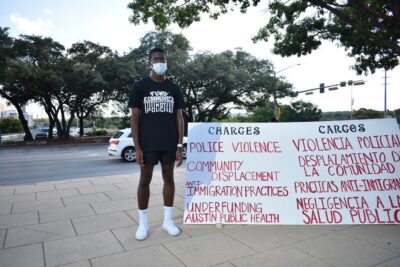 Aaron Booe at a protest he organized during the summer of 2020 in Austin.

All photos from Aaron Booe

For the past two years, the institute has been held virtually due to the pandemic, but it is as relevant and important today as it was when I attended. Attendees still get to hear from civil rights experts, meet other like-minded, politically engaged students, and learn the ropes about how to bring out the organizer and activist that lives within us all. And now, it can be done from home, opening up the opportunity for students who may not have been able to travel long distances for the week-long in person institute, like students with disabilities and those living in rural communities.

One part of the institute that stood out for me was Jeffery Robinson’s presentation, “A Chronicle of Racism in America.” He put words to ideas that I had long been thinking about, but could never articulate, including the structural phenomenon of race infecting our institutions, and how these systems are responsible for the continued oppression of marginalized groups. Growing up, I always heard people talk about individual responsibility and how if you just work hard, you can succeed in this country. But that’s not always true — these systems of oppression still hold back Black and Brown people from reaching their full potential. His presentation still sticks with me, and I think everyone should learn about the history of racism in the U.S.. These are not “divisive concepts” and it’s more important now than ever that people understand the truth about how race has impacted our country, from its founding to today.

After the institute, I came home inspired and ready to act. Last year, I founded an organization to advocate for marginalized communities in Austin. We’ve marched in solidarity with the Movement for Black Lives and their demands for racial justice. Additionally, we’ve advocated on behalf of people experiencing homelessness, organizing to ensure they have basic necessities for life, and organized demonstrations to support their right to live free of stigma and cruelty. Using the skills I gained at the institute, I took the lead to organize these events, and I know they are helping me to become a better organizer. People have thanked me for my service, but I’m just getting started.

I knew that I was interested in going to college in D.C., but the institute clarified that I needed to be in the heart of the action. I’m now a student at Howard University, and I feel like this is right where I need to be. Because of the pandemic, I’m still in Austin fighting for my community while I study and learn more about how to be the best advocate that I can.

There are hundreds of stories just like mine: a student goes to Washington D.C. and becomes inspired by the tireless work of the ACLU and others in fighting to protect and advance the rights of all people, but especially the communities too often left behind and ignored. I hope that students who are considering the institute know that it will change their lives for the better, and teach the critical skills needed to be an effective, disciplined organizer and activist.